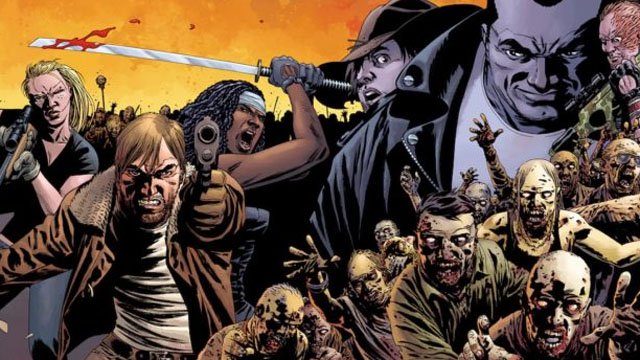 Many years have passed since Rick‘s death. Carl encounters a lone walker, and kills it. His wife, Sophia, comes to see what happened. Carl has no idea, how a roamer had gone through their defense. Sophia asks why Carl didn’t just shoot it, but he points out there could be more of them. Carl worries where their daughter Andrea is, but Sophia tells him she is still sleeping. Carl checks the walkers teeth to see if it had bitten anyone, then asks if Hershel is in town.

Hershel welcomes Carl, but is greeted with a punch to the face. Carl furiously asks him how many walkers there are in his Cart, which prompts Hershel to immediately ask if he’d found his escaped walker. Carl replies that he did, and that he killed it. Outraged, Hershel asks if Carl has any idea how much a walker is worth, and yells that Sheriff Kapoor will hear about this as Carl walks away.

Sure enough, the sheriff arrives to Carl’s house and informs him that there will be a hearing tomorrow, since Carl destroyed what is considered private property. Flabbergasted, Carl points out the walker could have killed somebody, but Kapoor tells him the law is only concerned with things that happened, not things that could have happened. Kapoor apologizes, and tells Carl he will do everything in his power to help him, and get the punishment reduced down to a fine.

The Grimes family is having dinner at the Sutton residence, where Carl tells Earl about what had happened with the walker. Sophia tells Earl that he should consider moving back into town, since there are a lot of people his age, but Earl denies this, as after the third expansion, he knew he didn’t belong in civilization anymore, and that he likes living out of town. As the Grimes family departs, Earl notes that Hershel wasn’t raised right, since Maggie was so busy with the Commonwealth and just gave him everything he wanted.

As they put little Andrea to sleep, Carl tells Sophia that he is thinking about his father, and how sorry he is that Rick never got to meet his granddaughter. He sighs that he misses his father so much.

Carl and Sophia arrive to the hearing only to find a long line of people in front of the building. Kapoor apologizes, and supposes that word must have gotten out about Carl coming into town. As the hearing begins, both Hershel and Carl make their cases before the judge. Hershel complains how he acquired the walkers at great expense for his show, and that Carl shouldn’t be above the law because of his father. Carl explains his reaction, and tells those present that, while the dead might be a novelty to them, he remembers how dangerous they are. Carl doesn’t regret what he did, and invites the people to punish him if they see fit, but forgive him if they, like him, believe that a world where the dead are entertainment isn’t the one his father fought for. Before the judge can make a ruling, Maggie interrupts the hearing and briefly talks to the judge, after which the judge rules that Carl won’t be punished, but must bring back a walker for Hershel on his next run to replace the walker he killed.

Afterwards, Maggie tells Carl that she thought she was getting him off easy, and that the judge was prepared to fine him, which he couldn’t afford with the marked value of a roamer being so high. Carl is outraged that a roamer even has any market value, but Maggie consoles him that she, too, is worried about how soft people have gotten over the last few years, though believes that perhaps this is how things are supposed to be. Carl, however, is adamant that bringing walkers into town is dangerous and that it’s only a matter of time before someone is killed. He rhetorically asks if she wants to bring back a world where people get killed by walkers. Maggie sighs and tells Carl this is not a world they live in anymore, and advises Carl to stop looking for dangers around every corner, since the old world isn’t coming back.

Carl angrily tells her that the world will only stay as good as it is now if they all do their part to maintain it, and that parading the dead around isn’t what his father fought for. As he storms off, Maggie warns Carl to do as he was instructed and not make things worse. Sophia bitterly tells Maggie to worry about her own son, who, Sophia claims, has been spoiled by her. Maggie defends her actions as wanting to make things better for Hershel than they were for them, but Sophia reckons he’d be better off if Maggie told him no every once in a while, dubbing Hershel an “asshole”. Maggie warns her not to talk about her brother that way, but Sophia informs her that everyone talks about him that way, and warns Maggie that she could end up with another Sebastian Milton if she’s not careful.

Sophia catches up with Carl and reminds him that she is on his side. Carl says that he knows, but wishes she wasn’t the only one. Sophia jokingly asks if she’s not enough for him, but Carl tells her she’s almost too much, before challenging her to a race to Andrea’s school, which she gladly accepts.

As they prepare to go to bed, Sophia informs Carl that Andrea is worried about him, so Carl promises to talk to her tomorrow. Sophia asks if he’s ready for bed, but Carl wants to go outside first and clear his head.

In the morning, Hershel is about to leave his hotel when the receptionist tells him he needs to pay if he’s checking out. Hershel assures him that his family is good for it, and promises to settle up tomorrow, as the receptionist glares at him. Outside, a little boy rushes to Hershel and and tells him to come quick. The boy takes him to his walker cart, where Hershel is shocked to find all of his walkers dead.